Next of Kin: Son of Fanny E S Holden of St Albany’s Golf Common, Malvern and the late William Holden. 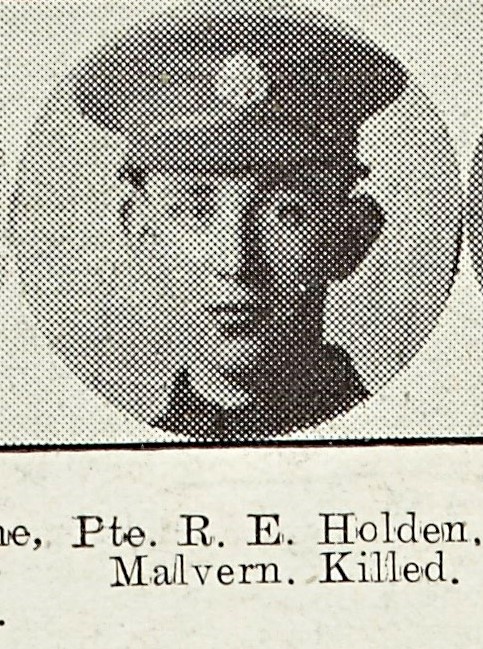 Robert Edwin Holden was the third son of the late William Holden and of Mrs Holden of St Albans, Malvern Common.  For some time he was in the employ of Mr F Russell Bishop of Rockliffe, Great Malvern and afterwards was with Mr Ferucie as a dental mechanic.  He enlisted in the East Surrey Regiment at Mill Hill, Middlesex on the 23rd March 1915.  At this time he lived at Northwood, Middlesex.  He went to France the following July with the 7th Battalion.

A Captain Roberts wrote the following:

“It is with much regret that I am writing to inform you that your son was killed in action on the evening of the 9th August. He was taking part in an attack on the enemy trenches when he was killed. Death was instantaneous and he could not have suffered any pain. I can only offer you my deepest sympathy and let you know how sorry I am. Your son was a very keen and willing soldier and popular with all. We shall miss him very much indeed. Your consolation will be that he died a noble death for his country. I have made enquiries and find that your son was buried near where he died.”

A friend of Robert wrote to his mother:

May I please tender my sympathy to you in the loss of your son. Please forgive my intrusion upon your sorrow, but he was a chum of mine, I having brought him out and I feel his death very much. He was a good soldier and British to the backbone. Wherever he was wanted he was there; nothing was too hard or too dangerous for him. Through his death we lost a good comrade and one on whom we could rely. My heart goes out to you in your sorrow. The only satisfaction you have is that he died for honour’s cause. We shall see that his death is repaid.”

The late Mr William Holden (his father) was for many years a GWR passenger guard on the lines between Malvern, Gloucester, Cheltenham, and Hereford – he died on the 9th December 1915. Despite being buried on the battlefield, Robert Holden’s grave was lost, probably as a result of later fighting and he is commemorated on the Arras Memorial.

If you know anything more about Robert Edwin Holden then please fill out the form below and we will update his record accordingly: