Nature of Death: Killed in action near Arras, France 4/6/16

Next of Kin: Son of Nurse Crome of St Moritz, Wyche Road 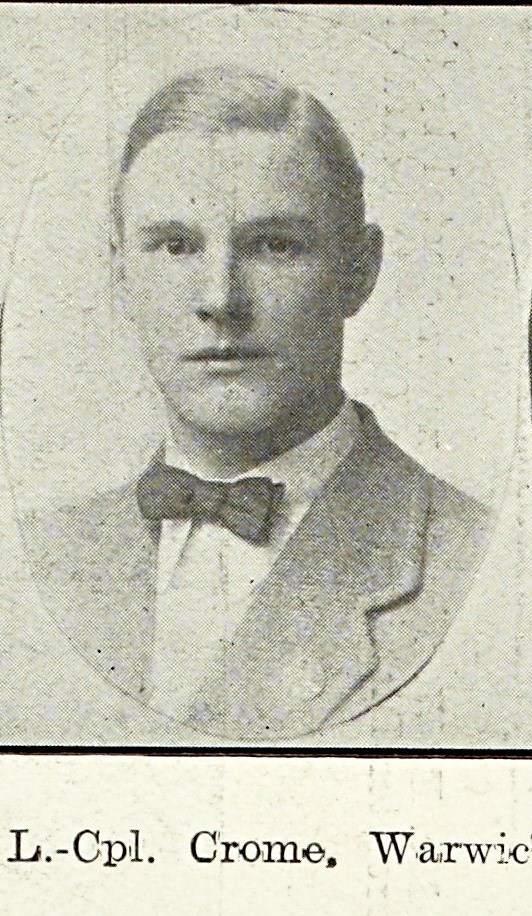 The Malvern News reported: “L/Cpl John Leslie Crome, Royal Warwicks, son of Nurse Crome, of St Moritz, Wyche Road, has been killed in action. The Colonel of the Battalion writes: ‘Your son has had an exemplary character. He died as nobly as he lived and both you and I have reason to be proud of him.’ His platoon commander writes: ‘I feel I must write to express my appreciation of his valuable service in the line. He was one of my best NCOs. One great thing must be borne in mind even during you sadness – he was killed doing his duty and doing it well. I can give no higher praise to any soldier than I give him. All the members of the B(attalio)n join with me in sympathy with you in your great bereavement.’

He was 20 years’ old, and educated at the Commercial Travellers School, Pinner where he won the Cuffley Medal and silver medal for drawing. He joined the colours in October 1914 and won a gold medal for boxing for his battalion.”

If you know anything more about John Leslie Crome then please fill out the form below and we will update his record accordingly: