Nature of Death: Killed in action France or Flanders 27/9/16

Next of Kin: Son of Mrs Kate Gibbs of Foley View, Priory Road 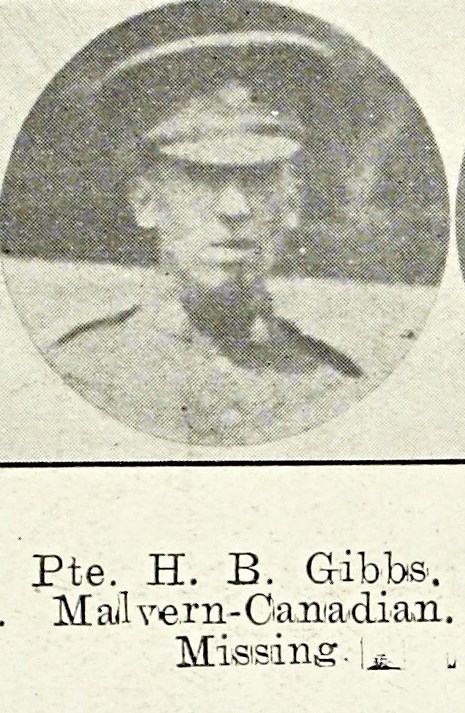 Horace Gibbs, the son of Mrs Kate Gibbs, was born in Newport on 15th October 1883. Sometime before the war he emigrated to Canada (probably to Fort Saskatchewan, Alberta) to stake a farming claim, at which, judging by his will, he was very successful. He had two brothers, Charles and Percival and three sisters Florence, Mrs Brenton-Cary and Mrs Hugh Wood (who was married to the proprietor of Southlea Preparatory School, Albert Road).

He enlisted at Edmonton on the 4th January 1915 and was placed in the 51st Overseas Battalion. On the 5th May he was promoted Acting Quartermaster Sergeant. After fifteen months training in Canada, the battalion embarked from Halifax for England on board the SS Missanabie. For reasons unknown, when he disembarked in France in June he reverted to the rank of Private and was taken on strength of the 7th Battalion.

During his time in France he wrote several pieces which the Malvern News described as “graphic word pictures” and several of his verses including The Question and The Ypres Trail were published.

In October 1916 Gibbs’ mother received official information that he was reported missing on the 27th September. However despite not officially being reported killed in action until April 1917 he had been killed by a shell. A Major of the 7th Battalion wrote (to Mrs Wood of Southlea):

“Your brother, Pte H B Gibbs, was originally reported missing as no trace of him could be found after the action. It now appears after further investigation that a large calibre shell was seen to explode in the machine gun position of which your brother was in charge, and no trace could afterwards be found of any members of the crew or the gun. It is therefore presumed that all were killed. I may say that your brother carried out his duties at all times with credit to himself and the Battalion and during our first engagement on the Somme assisted materially in stopping an enemy counter attack by his coolness and precision under the most trying circumstances.”

If you know anything more about Horace Boddington Gibbs then please fill out the form below and we will update his record accordingly: