Next of Kin: Son of Caroline and late Walter Beale of Ripon; husband of Ruth Beale of 2 Rostherne, Upper Howsell Road 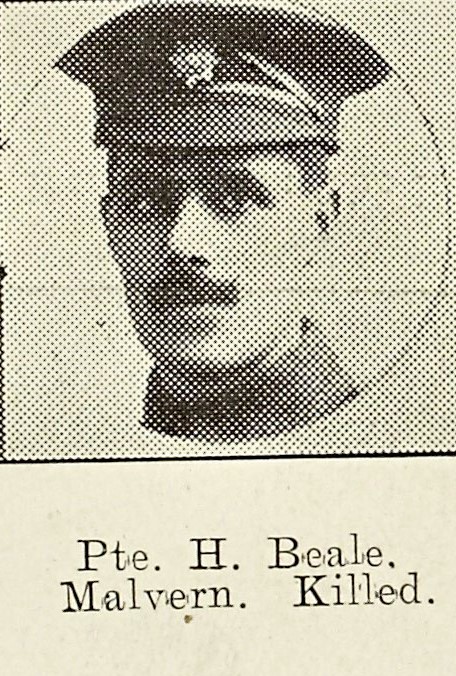 Harry Beale was born in Harrogate in 1880, the son of the late Walter and Caroline Beale who at the time of his death lived at Ure Bank, Ripon, Yorks. On the 1901 Census Harry Beale was a footman to the Shakerley family at Grove Park, Budbrooke near Warwick. His parents at this time lived at 14 Industrial Terrace, Ripon.

Like many domestic servants he went on to run his own establishment, the the Rockburn apartments on the corner of Como Road and Victoria Road. His wife, Ruth Beale gave her address during the war as 2 Rostherne, Upper Howsell Road, Malvern Link – presumably they gave up the apartments when Beale enlisted.

In 1917 the Malvern News reported: “Private Harry Beale, a well-known resident of Malvern, was killed in action on May 9th 1917. Prior to enlisting he resided at Adelaide House, and previously for eleven years at “Rockburn” taking over the latter from his uncle, Mr T. Gatward, now of the Montrose Hotel. Private Beale who was 38 years of age was home on final leave in February and afterwards rejoined his Battalion in the south of England, where he remained until the middle of March, when he went to the front, being attached to the Devonshire Regiment.

“He was struck in the head while carrying bombs, and was killed instantaneously. A brother, a Sergeant in the Royal Scottish Fusiliers, was wounded in September last. The wife of the latter died the same day, leaving two sons ages 8 and 9 respectively.

Private Harry Beale leaves a widow and a son aged 9, and 6 brothers and sisters, one of the former residing at Walmer Lodge, Malvern. Pte W E Beall, of the Devonshire, a comrade of deceased, now in hospital in Scotland, writing to Mrs Beale says: “Your husband was carrying a box of bombs with his section. I followed a few minutes later, and saw him lying on the ground quite dead, a piece of shell having struck him in the neck and back. I can assure you that never did a man go forward to his duty with more coolness and courage needless of danger. He died a hero for his King, home and country.”

Pte T.H. Tyler, a chum of the deceased, writes: “I did not see your husband killed, but one of the boys who did, told me he was hit on the head. I can assure you that you have the sympathy of all his colleagues.”

“A memorial service for the late Pte Beale will take place at the conclusion of evensong at Malvern Priory Church on Trinity Sunday, June 3rd.”

Of his brothers and sisters – Miss Kate Beale married Mr Thomas Galensby Burrill at Malvern Baptist Church in June 1918 (she was the second daughter Mr and Mrs Beale). Her brother, Mr H E Beale of Walmer Lodge gave her away and she was attended by her sister Miss Mabel Beale. The couple were presented with a cheque from another brother, Mr A Beale.

If you know anything more about Harry Beale then please fill out the form below and we will update his record accordingly: