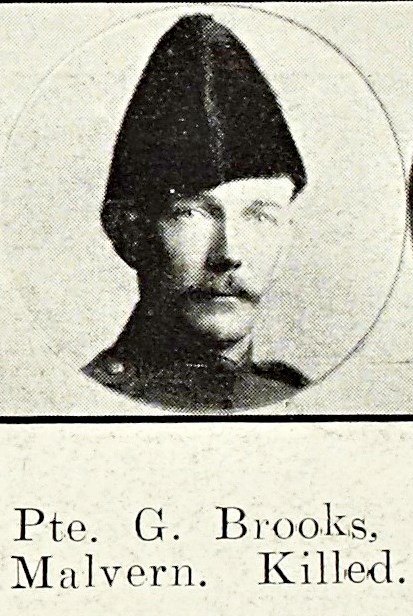 “His death is deeply regretted by his comrades and his commanding officer. I wish to convey my regret at the loss of a brave soldier and to express sympathy with you in your sorrow.”

“He was killed in the performance of his duties which he always fulfilled to extreme conscientiousness. He was highly thought of by the platoon to which he was attached and others have also spoken of his sterling qualities. Without a doubt I have lost the best man in my section. He had my respect because of his steadfastness to duty and his belief in the fact that this is a righteous War. He carried on to the end in this spirit, in spite of his abhorrence of war and its necessary suffering. I am requested by his comrades to tender to you and all his relations their sympathy and regrets.”

Brooks emigrated to Canada in 1906. He joined the Canadian Infantry and came to England in June 1915. He made a short visit to Malvern Link during his stay, before proceeding to France in August. Soon after entering the front line he was slightly wounded. Whilst in Malvern link he was associated with the Free Church and Sunday School.

In February the following year, his father received a letter form the Canadian Record Office stating that on the 18th November his son Pte George Brooks was rendering first aid to the wounded, crawling from shell hole to shell hole in No Man’s Land, throughout the day. Completing this work, he crawled back to the trench and was rising to climb over the parapet when he was shot through the head by a German sniper. He was buried in front of the line.

Cyrus Harry Brooks, George Brooks Brother was caught up in Germany at the outbreak of war and was interned at Rutheben. In November 1918 after the Armistice he contributed to a London newspaper column entitled: “The Revolution as we saw it.” He said:

“We Britishers must remember that whatever the Germans have done, if we wish to understand them, and through this understanding, to help to build a clean Germany for the future, we must free our judgement so far as the masses of the German people are concerned from mere hatred and let our justice keep its due tempering of mercy.”

Noble sentiments having lost a brother.

George Brooks’ body was recovered from the battlefield and today lies buried at Adanac Military Cemetery.  Found on the Somme, Adanac was contains predominantly Canadian burials and takes its name from Canada backwards. The grave of George Brooks at Adanac Military Cemetery

If you know anything more about George Robert Brooks then please fill out the form below and we will update his record accordingly: