Next of Kin: Son of Edward Bruton of South View, Court Road, Malvern 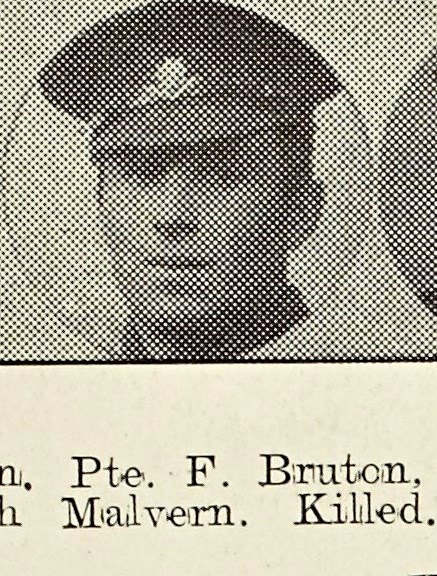 Frederick Bruton was born in Malvern, the son of Edward Bruton, a hairdresser and Mrs Bruton of South View, Court Road. In April 1917, they received information that their son Pte Frederick Bruton who joined the Malvern Chums Company in September 1914 had been killed in France. Before the war he was employed at the Worcestershire Golf Club and was a prolific sportsman – he played cricket for Malvern Town Club and the College Servants, and was a member of St Andrew’s Football Club and Malvern Workingmen’s Golf Club.

Frederick had been involved on the 1/8th Worcestershire Regiment’s attack on a fortified hill known as the Mound near Templeux-le-Guerard.  To read more about this action, click here:

If you know anything more about Frederick Edward Bruton then please fill out the form below and we will update his record accordingly: