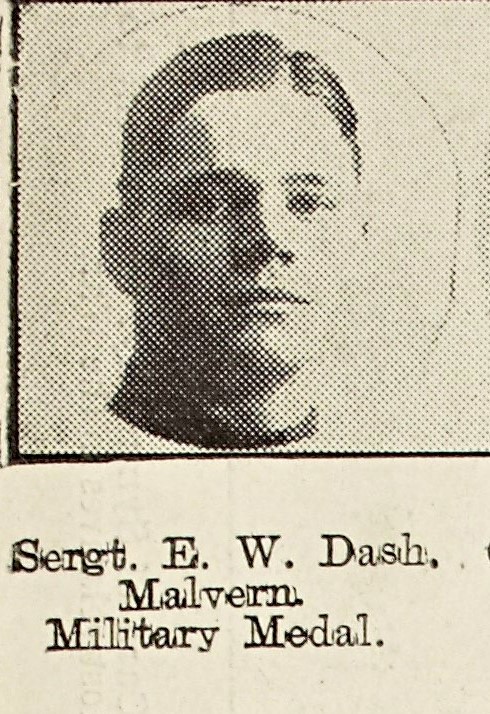 Edward Dash was the second son of Edwin James Dash, a baker and Kate Louise, his wife of Richmond Cottage, Malvern Common. He served with the 1/8th Worcesters and in May the Malvern News reported:

“Sgt E W Dash, Worcestershire Regiment … has been awarded the Military Medal. He’s been at the front since March 1915, having joined the Malvern Chum’s Company. On the 5th April 1917 he was one of two NCOs left unwounded during the attack on a quarry, he carried on bravely under heavy fire from the flank and front and was invaluable in reorganising his platoon and consolidation the position gained.

He was formerly a patrol leader with the 1st Malvern Troop, and got a reputation as a good boxer. Before enlisting he was employed as an under gardener by Mr Rashleigh of Malvern Wells. His brother Mr A E J Dash has been at the front since the outbreak of War and is now in the Machine Gun Corps, having transferred from the Dragoon Guards.

In November 1917 he was selected for a commission, but for some reason this was not granted. He decided to stay in the army after the war and was serving in the 3rd Worcesters in India, when he was murdered by a native guard.

In September 1917, Arthur Dash’s death was reported, however a letter from his officer a month later put pay to this rumour: “Mr and Mrs Dash have received news that their son, Arthur, is not dead. A letter from his Captain states that at the time of writing Tpr Dash is attending to his horse. He has been attached to him for 2½ years now and had he taken promotion when he was offered it he would be a Sergeant by now.”

If you know anything more about Edward Walter Dash then please fill out the form below and we will update his record accordingly: