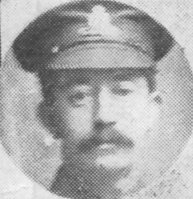 At the age of 32 William Powell attested under the Derby Scheme on 22nd November 1915. He gave his home address as 3 Greenhill Cottages, Poolbrook Common. He was mobilised on 1st June 1916 and served at home until 23rd March 1917, for the majority of time with “B” Siege Depot, Bexhill. On landing in France he was posted to the 1st Army Pool and finally 211 Siege Battery on 18th April 1917.

The ” Two Elevens,” were formed at Falmouth in 1916 out of Cornish Territorials, and drafts from Scotland, Birmingham, London and other centres. They served in France and Belgium; supporting at the Battle of the Ancre, and helped to capture Vimy Ridge; serving in the Salient; enduring the Retreat; later advancing with the Fourth Army to capture the Hindenburg Line; and finally to reach Le Cateau on the day of the Armistice.

The Malvern News reported: “Gnr William Francis Powell, RGA (who lived at Knightwick Cottage, Poolbrook) has been killed in action, aged 36. He enlisted in June 1916 and went to France in March 1917. Before enlisting he was a lamplighter employed by Malvern UDC, by whom he was employed since he was 14. He leaves a widow and a two-year-old daughter. A letter from a Major states Gnr Powell was hit in the head by a shell splinter, his death being instantaneous.”

William Powell had married Gertrude Ethel Burston at Upton Register Office on 9th August 1913. She received a letter from one of her husband’s comrades Gnr William F Spratling:

“I would like to express the sincere sympathy of you husbands comrades in his Battery. They have asked me to do so. I can assure you that your husband was one of the most popular men in the battery, and was liked by everybody. Quite a gloom has been past over us by his death in action. He recognised me immediately I joined the Battery some three months ago and we naturally were able to have many a chat concerning Malvern and its doing. Personally I feel his loss very much.”

If you know anything more about William Francis Powell then please fill out the form below and we will update his record accordingly: