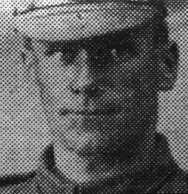 William Coombes was born at Malvern, the son of Mr J Coombes of Myrtle Cottage, Belvoir Bank. He served in the regular army before the war, and was recalled from the Army Reserve at the outbreak of war. He served initially with the 2nd Battalion and was awarded the Distinguished Conduct Medal for bravery at the Battle of Loos in afternoon of the 27th September 1915. His citation, published in November 1915, reads:

“For conspicuous gallantry on the 29/9/15 near Vermelles, when by his courage and example he rendered effective assistance in repulsing a determined bomb attack by the enemy, and was generally influential in maintaining confidence in the men at a critical time, when the attack seemed likely to succeed”

At some point after this act of bravery, he transferred to the 10th Battalion – probably as a result of being wounded. This battalion had been in France since July 1915, but its first major action did not occur until a year later on the Somme. On the 3rd July they attacked La Boiselle and suffered heavy casualties (110 other ranks killed alone). It is highly likely that Coombes, who was wounded in July, was injured at this action.

After recovery, he returned to his old Battalion, the 2nd and was killed at the desperate Battle of Neuve Eglise during the German Spring Offensive of 1918 on the 11th April. Such was the disorganisation that the offensive caused in the British forces, it was 10 weeks before Coombe’s widow heard anything of her husband – and then it was only that he was wounded and missing. Not until January 1919, nearly a year later, did the Malvern News reported:

“Mrs Coombs, of Geneva Terrace, West Malvern has been officially notified that her husband, Sgt William Edward Coombs DCM Worcestershire Regiment, previously reported missing is now presumed to have been killed. A comrade states he was killed by a machine gun, he received severe wounds particularly in the head and abdomen and died about fifteen minutes later.”

If you know anything more about William Edward Coombes then please fill out the form below and we will update his record accordingly: