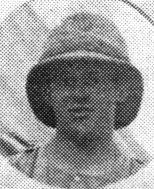 Walter Griffin was born in Worcester, the son of Mr and Mrs W E Griffin, (later of Hawkstone House, North Malvern Road). His two brothers, Cecil and Owen were also in the Worcestershire Yeomanry. His father was a cab proprietor and also ran the Supply Stores on Newtown Road (at Bedford House).

Mr and Mrs Griffin received the news of the death of their third son Tpr Walter Neil Griffin, Worcestershire Yeomanry in December 1917. He was called up with the Yeomanry at the beginning of the war and went to Egypt in April 1915 for Gallipoli. Revd Maynard Smith, Vicar of Holy Trinity wrote a tribute to him in the Parish Magazine that month, and noted that he was a choirboy and server at the Church of the Ascension (strangely he is not commemorated here).

In February 1918 they received a letter from the Regimental Sergeant Major of the Worcestershire Yeomanry informing them how their son died:

“He died fighting to the last minute. He was a hero. He was sent with a message back for more men to help, just after out gallant lads had made their brilliant charge. During the act of doing this he hot wounded (and his horse as well). After everything was quiet he was found by the side of three Turks, who were dead also. That was three to one, and I must say that he accounted for them. He has won the greatest praise amongst all his comrades and especially from myself and I must day he was the best lad I ever had. You have my greatest sympathy in your great bereavement, and also that of all his comrades.”

If you know anything more about Walter Neil Griffin then please fill out the form below and we will update his record accordingly: