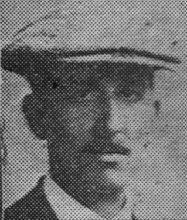 Walter Hale was born in Malvern, and joined the Worcestershire Regiment in 1916. He was severely wounded at the end of a tour of duty in the trenches on the 6th December 1916 on the Somme. The 1/8th Battalion, of which Hale was then a member was serving at Le Sars, in front of the formidable Butte de Warlencourt. A description of actions on the 14th of that month gives a good idea of what it must have been like when Hale was wounded (to read more click here)

In May 1918 the Malvern News reported: “Pte Walter Hale, Worcestershire Regiment (the son of Mr and Mrs G Hale, Pharmacy House, Barnards Green) has been killed in action on the 15th April. He joined up in May 1916 and went to France in September 1916. He was severely wounded in December of that year and returned to France in May 1917 – he was home on leave in March 1918. He was well known in Malvern Link where he resided with his wife for several years. The deceased was with the Pearl Assurance Company for ten years and was respected by all who came into contact with him. He was one of the first members Volunteer Training Corps in which he took a keen interest, becoming a very good shot. Sympathy is extended to his widow and family; his brother is still in France.”

If you know anything more about Walter Henry Hale then please fill out the form below and we will update his record accordingly: