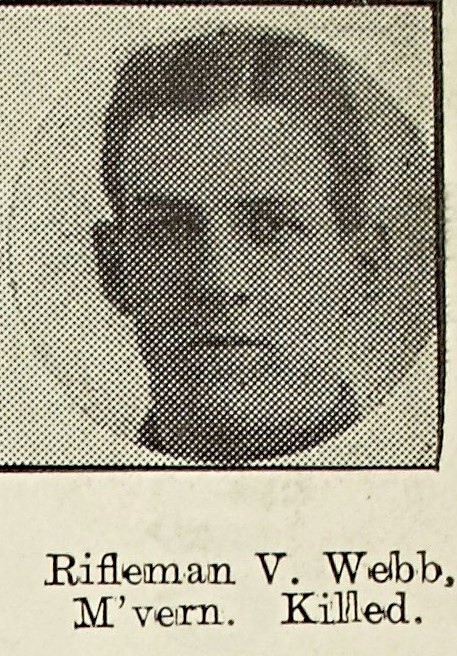 The Malvern News reported in in June 1917: “Mr and Mrs William Webb, Worcester Villa, Lower Chase Road, received information that their eldest son, Pte Victor Webb, Queen Victoria Rifles, was killed in France in the middle of April 1917. He was aged 20 and before the war was employed at the Turf Club, Piccadilly – during his time in Malvern by Mr A Mander, Belle Vue Terrace. “

Little is known about Victor Webb, however Charles Dickens (Jr) in his Dictionary of London 1879 notes that the Turf Club, Piccadilly: “Was formerly the Arlington Club. [It required] no special qualification… [Rules included]…each Member playing at whist, humbug, piquet, écarté, &c., shall, prior to leaving the club, pay to the porter 1s. 6d. If only two play, the charge to be 5s. Each member playing at dummy to pay 2s. Gentlemen calling for fresh cards must have two packs, which will be charged 5s. “The Laws of Whist,” edited by John Loraine Baldwin, were adopted in 1866. “The Laws of Piquet,” and “The Laws of Ecarte,” edited by H. Jones C. Cavendish, were adopted in 1873 and 1877. For the convenience of members, the committee engage a cashier, whose duty it is to settle the whist accounts between the members, but the club is not responsible for the acts of such whist cashier. The members leave their money in his hands on their own responsibility. The election [to the club] is by ballot in committee, two black balls exclude [membership]. The entrance fee is £31 10s., and the subscription £15 15s.”

If you know anything more about Victor William Webb then please fill out the form below and we will update his record accordingly: