Next of Kin: Husband of Mrs Bentley of Court Road, Malvern (in 1918) 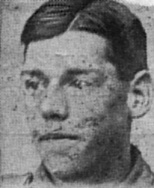 Records at the National Archives show that Sydney Bentley enlisted in the Kidderminster based 7th Battalion of the Worcestershire Regiment on the 23rd April 1912 and went overseas with the 48th (South Midland Division) on the 31st March 1915.

According to the Malvern News, he was wounded several times during his service and was later transferred to the 1st Battalion.  He was taken prisoner on the 26th May 1918; a large number of the 1st Battalion were taken prisoner on this date. In August 1918, his wife received a postcard from him from Germany stating that he was a prisoner and quite well. He was discharged from the army as no longer physically fit due to wounds on the 14th March 1919.

He died in 1934 at the age of 40.  The War Memorial at St Matthias-in-the-Link dates from the late 1930s and includes a number of men who died as a result of the war after 1921 (and therefore not commemorated by the Commonwealth War Graves Commission)

If you know anything more about Sidney Bentley then please fill out the form below and we will update his record accordingly: