Nature of Death: Died of wounds received at Monchy-le-Preux, near Arras, France 15/4/17

Next of Kin: Son of Samuel and Margaret Bannister of Victoria House, Star Alley, Cowleigh Road. 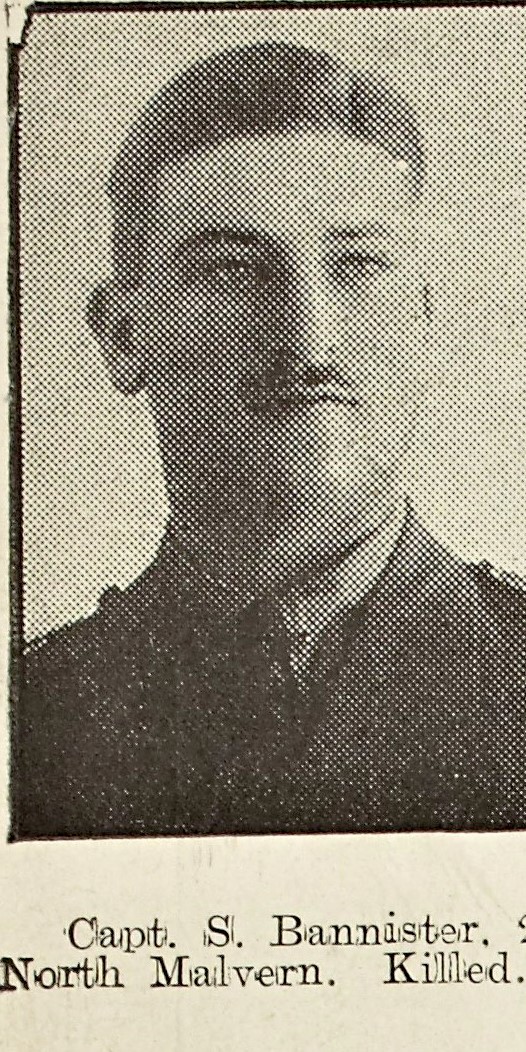 Samuel Bannister, the second son of Samuel and Margaret Bannister of Victoria House, Cowleigh Road was born on August 19th 1892. He was educated at North Malvern Boys School, and won a scholarship to Worcester Royal Grammar School where he studied from 1905 to 1911. Not tired of education, Samuel Bannister followed his brother Joseph and sister Alice into teaching . It was later written that as a schoolboy Captain Bannister showed himself “the soul of honour and chivalry, and won not only popularity for his fine record as a student and sportsman but sincere respect from masters and boys alike for the steady loyalty with which he upheld the highest ideals and the honour of the [North Malvern] School, where his memory will ever be cherished with loving pride.”

Sam Bannister was a very keen sportsman, playing both cricket and football, holding a silver cup for heavy-weight boxing and being also an accomplished rifleman.

Samuel and Joseph were given leave to join the Worcestershire Yeomanry on the 2nd September 1914 and five days later left the boys at North Malvern to join the first line unit at Newbury in Nottinghamshire. Samuel Bannister as a trooper in the Worcestershire Yeomanry

In April 1915 the Yeomanry were sent to Egypt. Samuel stayed on (possibly with the regimental transport) while his brother proceeded with the rest of the unit to land at Suvla Bay on the Gallipoli Peninsula on August 8th. On the 21st August the yeoman mounted an attack on Scimitar Hill and Joseph was slightly wounded. In the meantime, Samuel had moved to Cairo and trained for a commission. He became an officer in October 1915 and was posted as a replacement to the 4th Worcestershire Regiment, which had suffered such high casualties at the Dardanelles. He landed on the Peninsula shortly after and became Bombing Officer and played an important role in the skilful evacuation of Suvla and Cape Helles on the night of the 8th/9th January 1916, being one of the last four officers to leave.

The 4th Worcesters went first to Egypt, but were soon in France – disembarking on the 15th March 1916. Samuel Bannister served throughout the whole of that year, taking part in the Battle of the Somme in July and through exceptionally good work, gained the “warm approval of his superior officers and the entire trust and goodwill of his men.” He was home on leave for Christmas 1916.

On his return to France he took over the duties of the Battalion Transport Officer (putting his considerable knowledge of horsemanship into good use no doubt). Not long before the opening of the Battle of Arras in April 1917, Sam Bannister was promoted to Acting Captain and given command of ‘Y’ Company. On the 12th April 1917 Bannister’s Company took over a support trench (which had been recently captured by the 12th Division) near the village of Monchy-le-Preux from the Middlesex Regiment. The 29th Division, to which Bannister’s Battalion belonged, was to carry on the attack on the 13th, but these plans were postponed. On the 14th two battalions of the Brigade attacked, but were met by a powerful counter action, and the Worcesters, who were holding the line, had to repel the advancing Germans.

A soldier of ‘Y’ Company testified that Captain Bannister was “one to whom fear was unknown, and he infused his own daring spirit into his Company, which lost in him one of its best and most valued officers.”

He was hit by a shell splinter which blew his left arm completely off, and he also received a terrible wound to the knee. However in spite of these injuries he refused to be carried away until a fellow officer, who he deemed to be in an even worse condition, had been evacuated. The stretcher-bearers returned to find Captain Bannister walking slowly to the first aid post. He was taken to hospital, and despite the best efforts of the medical staff, died the following day.

On hearing of his death, the officer commanding the 4th Worcesters wrote to Captain Bannister’s father:

“As Officer Comdg 4th Worc Regt I write to convey our sympathy with you at the great loss which has come to you in the death of your son.

He had his left arm blown off on the morning of the 14th and at the same time another Officer was hit, he absolutely refused to be taken away till the other officer was cleared and expressed a wish to remain with his Coy. His courage and bravery was a fine example to those around him and when he was taken away the whole of his Coy cheered him as he left.

He was a personal friend of mine and was with me since the Dardanelles days. I put him in charge of the last party to leave Helles and Suvla on both occasions knowing I could depend on him.

I promoted him a Temp Capt only about 10 days ago and I consider I have lost the best officer and friend in my Bn. You will probably get letters from other officers who know him. He was a most popular, reliable, hard working and as brave as they make them.

Had he lived I have no doubt he would have got the decoration only yesterday I recommended him for, however he has gone with a better one and left a fine example of bravery behind him.

On behalf of his brother officers and his Coy I offer our very deepest sympathy with you and yours.

PS I only heard of his death today at a hospital well behind the lines where he was hit.”

He was 24 and very popular in Malvern and was for sometime a prominent member of West Malvern football club and also a member of the Cowleigh Miniature Rifle Club, where he held the Rifle Shooting Shield for twelve months.

A memorial service was held for him at Holy Trinity on Friday the 20th April 1917 at 3 p.m. The boys and staff of North Malvern School were in attendance. After this service, Revd H Maynard Smith Vicar of North Malvern wrote: “He was thorough in all he undertook. He could manage little boys in a school and proved himself a commander of men. I hope for many a long year the boys of North Malvern will cherish his memory and be inspired by his splendid example. We who knew him personally mourn a friend.”

If you know anything more about Samuel Bannister then please fill out the form below and we will update his record accordingly: