Nature of Death: Killed in action at the Battle of Cambrai, France 3/12/17

Next of Kin: Youngest son of Mrs H Pritchard of Barber's Hill, Malvern 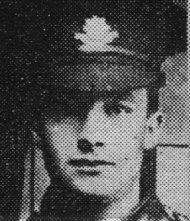 Pte Ralph Pritchard, Worcestershire Regiment (the youngest son of Mrs H Pritchard, Barber’s Hill, Malvern) who was reported missing in March 1918 was officially reported killed in action or died of wounds in September. Evidently his death occurred whilst a prisoner in German hands as a letter received from the Enquiries Department for Wounded and Missing Soldiers in connection with the Red Cross states that his name appeared on a German official list of the dead, however his body was never recovered or his grave lost.

In a letter received by Miss Hollins from the Red Cross Enquiries Dept there is a statement by Pte Alfred Harris (whose home is at Silver Street, Worcester) to the effect that in December 1917 he saw Pte Pritchard who was 25 yards behind him stumble over some barbed wire. He was at once picked up by some Germans and made a prisoner. Pte Harris writing to Mrs Pritchard says: “Your son was always jolly and liked by all that knew him. He was regarded by his officers and NCOs as a trustworthy soldier always willing to help a comrade if he could.”

He joined up in November 1915 and was billeted for sometime in Malvern Link. He went to France in May 1916. He was aged 24 and was formerly employed in the gardens of the Priory School. He was an old member of the Church Lads Brigade and was a prominently associated with St Andrew’s Gymnasium.

If you know anything more about Ralph Pritchard then please fill out the form below and we will update his record accordingly: