Nature of Death: Died of wounds in German hands received on the First Day of the German Spring Offensive, France 21/3/18

Next of Kin: Eldest son of Revd and Mrs J J Edwards of Berrow Vicarage 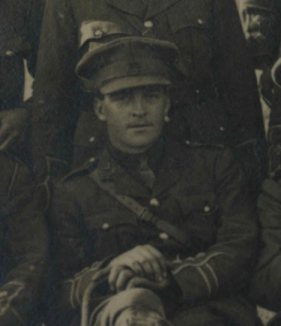 Captain Llewellyn Albert Edwards, Royal Warwickshire Regiment, previously reported wounded and missing, now reported killed in action on March 22nd at 11pm, was 25 years of age, and the elder son of the Rev J J Edwards and Mrs Edwards of Berrow Vicarage (the Rev J J Edwards was formally Curate-in-Charge of St Andrews, Malvern Common). The deceased officer obtained a scholarship at Malvern College from Dr Douglas’ school, Malvern Link, and gained an open scholarship at Christ’s College, Cambridge, where he had been in residents one year when the war broke out.

He was a member of the Malvern College and Cambridge O.T.C. In October 1914, he was commissioned into the 7th Battalion of the Royal Warwickshire Regiment was gazetted Lieutenant the following December, and Captain in March 1916. He was severely wounded on July 19th, 1916 while leading his Company of the 2/7th Royal Warwicks. He returned to the front in April 1917, and was given command of his old Company.

Capt Edwards was recommended for honours for the manner in which he conducted his men in the retreat on March 21st and 22nd.

His colonel wrote: “Your son was beloved by all. My loss is great. He was one of my best officers. No trouble was too much if it was for the comfort or efficiency of his company. He was a gallant man, and I had the greatest admiration for his niceness of character. I have lost a fine officer and good comrade.”

The Chaplain wrote: “His death has cast a gloom over the whole battalion. He was a universal favourite with officers and men alike. His cheery manner and brightness will be sadly missed. It was my privilege to know your son very well. He was looked up to all and was a splendid soldier, who always thought of himself last. He will be sadly missed. Always regular at his Communions and always endeavouring to do a good turn to someone. I always looked upon him as one of the stalwarts of this Battalion. Your son was a great friend of mine, and in fact all the Battalion looked upon him as a magnificent type of an English officer.”

A brother officer wrote: “I am the only officer left in his Company and was with him where he was mortally wounded. All day previously he had shown great cheerfulness and disregard of danger, and was forever walking up and down urging and cheering on the men. Even when he was wounded his last words to me were, ‘Look after the Company, and keep down off the top of the trench.’ These words were just characteristic of him – a way of thinking of others before himself. A very good officer, liked immensely by his fellow officers, and loved by all his fellow men.”

Another officer wrote: “To my own knowledge he lived a blameless and religious life. He died like a gallant gentleman, and his life was an example to us all.”

If you know anything more about Llewellyn Albert Edwards then please fill out the form below and we will update his record accordingly: