Next of Kin: Son of Mrs B Williams of Hawthorn Cottage, Lower Wilton Road, Malvern 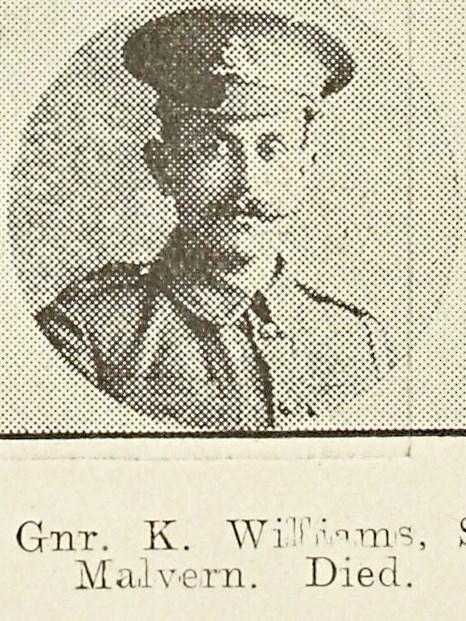 Kenneth Gordon Williams was the son of Mrs B Williams of Hawthorn Cottage, Lower Wilton Road, Malvern.  He served with the Royal Horse Artillery and died of pneumonia at Woowich Military Hospital on 23rd January 1917

The Berrow’s Worcester Journal reported his funeral at the end of the month:

“The funeral of Kenneth Williams, of the Royal Horse Artillery who died from pneumonia in a Woolwich Hospital took place at Malvern Cemetery on Tuesday afternoon.  The Rev C Fisher Mytton (curate of Christ Church) officiated.

The coffin was covered in the Union Jack.  Royal Engineers acted as bearers, and formed the firing party, which, under Sergt-Major Holehouse, fired three volleys over the grave.  Bugler Shipley, of the Devonshire Regiment, sounded the Last Post.

Croquills Jottings”  in the same paper, the commentator added that:

“…apropos of the death of Gunner Williams it is probable that had he lived, he would have got his stripe.  He was about to undertake his signalling course.”

If you know anything more about Kenneth C Williams then please fill out the form below and we will update his record accordingly: