Nature of Death: Killed in action Templeux-le-Guerard on the Somme, France 5/4/17

Next of Kin: Son of Richard and Alma Tipton of Lansdowne Crescent, Great Malvern 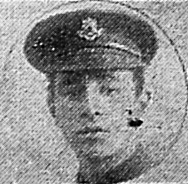 John Tipton was born at Marshbrook near Church Stretton in Shropshire in 1893. He joined the 8th Territorial Battalion of the Worcestershire Regiment in Autumn 1913. He had two brothers, Henry and Ernest and all three of them served with the Worcestershire.

Tipton served to begin with C Company, that was based in Malvern, but in the first few months of the war, infantry battalions reorganised, losing the characteristic 8 companies, for 4 ‘double’ companies of around 200 men each. C Company, which consisted of men from Malvern and Upton-on-Severn, merged with D Company from Evesham and Pershore, to form the new B Company. It was with these men that John Tipton landed in France on the 1st April 1915.

After initial tours of the trenches around Ploegsteert Wood and Le Touquet on the Franco-Belgian borders, the 48th (South Midland) Division of which the 1/8th Worcesters were a part, moved to the Somme sector. Here near Hebuterne on 9th September 1915, Pte Tipton suffered gun shot wounds to the left thigh and was taken out of the line. He was admitted to the 6th British Red Cross Society Hospital in France two days later. Eight days later he was transferred to England to recuperate.

It is not known when Tipton rejoined the 8th Battalion, but, promoted to Corporal, he took part in the storming of a heavily defended hill – ‘The Mound’ near Templeux-le-Guerard on the Somme. German forces had retreated in early 1917 towards their fearsome Hindenberg Line, giving the Allies the land around the Peronne. The operation, though likely to fail due to poor weather conditions and indefinite orders was successful; but the attacking companies, lost 11 men killed, including John Walter Tipton and 37 men wounded.

His father, Richard Tipton died just over a month later on the 31st May. In the early years of the war he and his wife were keen to see their sons join the army. A prominent Malvern resident, General Sir William Campbell reported:

“A resident here, Mr R Tipton, who had with his wife visited Norton Barracks to see their son who enlisted in the Worcestershire Regiment told him no man could wish for anything better. The barracks are perfectly clean, good sleeping room, plenty of clean blankets and plenty of the best food.”

It’s likely that the Tiptons had visited either Harry or Ernest, who unlike John served in Kitchener’s Army. Harry was severely wounded in October 1916, but went on to served in Salonika and survive the war. Ernest, who served in France, also survived.

If you know anything more about John Walter Tipton then please fill out the form below and we will update his record accordingly: