Nature of Death: Died of wounds at Louvencourt, on the Somme, France 8/9/1917

Next of Kin: Son of John and Emily Thomas of Cromwell, Leigh. 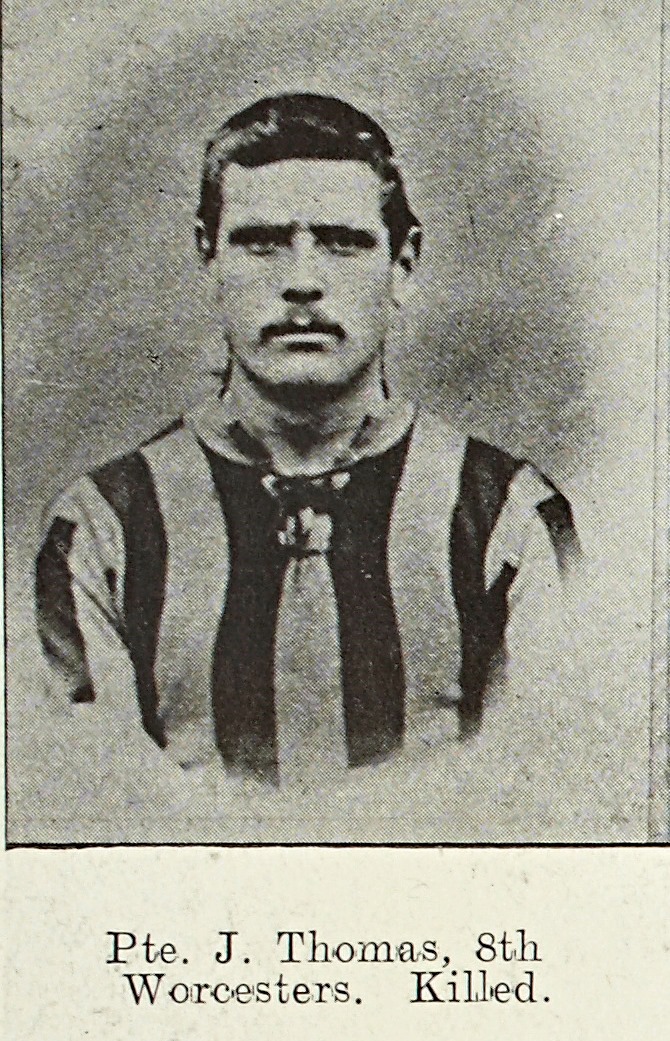 Before joining the Territorials in October 1914 John Thomas, who was born in Cradley, Herefs, was employed at Leigh and was a member of the local football club. His cousin Arthur Grubb was killed with the 3rd Worcesters in September 1914 in France.

Major R H Hubert Creek, commanding the Battalion (in Colonel Peake’s absence) wrote: “It is with the most profound regret that I write to to give you the saddest of intelligence. Your son Pte J Thomas, No 3313, of this Battalion was wounded in the thigh by a shell when on duty in the trenches yesterday morning, and we have just been informed officially that he died the same evening. Our Medical Officer was close by when your son was hit, and so he received every possible attention at once. He was taken to hospital and everything was done that could be, but the injury and the shock were too severe. He was buried this morning in the military cemetery attached to the hospital. I can only add my sincere sympathy in your great sorrow.”

The Revd P C Thomas, Vicar of Clent and Senior Chaplain of the 48th Division wrote: “I regret that I have not been able to get your address before in order to write to express my deep sympathy with you in the loss of your son, who died of wounds in hospital on 8th September and was buried in the military cemetery on 9th September. He was terribly wounded by a shell in the left leg, and the doctors from the first had very little hope of being able to save him. We all deeply regret the loss of your brave boy, and I desire to assure you of my great sympathy with you. I was with him frequently, and said the prayers with him shortly before he passed away.”

Lieutenant H.S. Benjamin, commanding 14th Platoon, C Coy wrote: “As officer of the platoon to which your son belonged, please accept my sincere sympathy in your loss, which is shared by all his comrades. We indeed miss him amongst our number. He was hit in the left thigh by an anti-aircraft shell core. I was on the spot a few minutes after it happened and I can assure you that everything that was possible was done to save his life. The doctor assures me that he did not suffer very much. I trust you will be comforted in the knowledge that your son died bravely in the performance of his duty.”

Pte William Brough, writing on behalf of the men of the 14th Platoon wrote: “I am writing this short letter to you on behalf of the Platoon to which your late son belonged, to express our very deep sympathy with you on the loss of your son. I was his mate, and have missed him very much. He was standing by me when the accident occurred and first aid was promptly rendered, and the doctor was soon on the spot. Your son was a general favourite with the men and his genial nature and soldierly bearing were grand. I am writing this hoping it will help you to bear your great trouble and wishing you a brighter future.”

If you know anything more about John Thomas then please fill out the form below and we will update his record accordingly: