Nature of Death: Died of sickness as a prisoner in Mesopotamia 15/6/16

Next of Kin: Son of Henry and Caroline Annal of Bank Street, Melksham, Wiltshire. 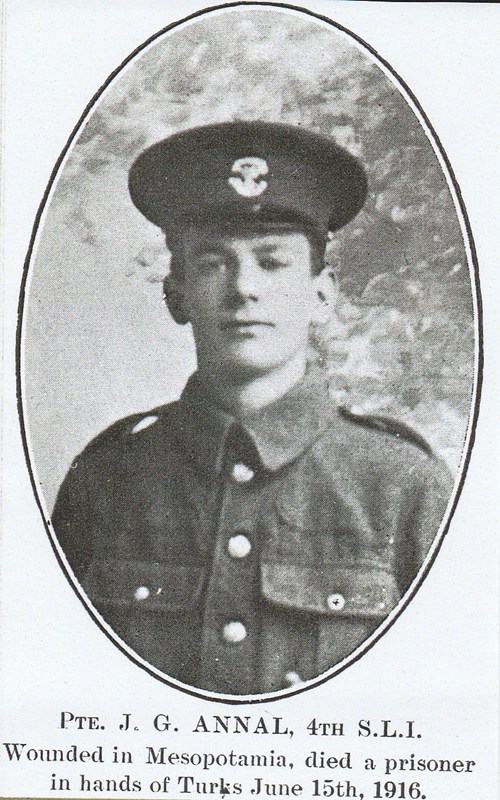 John Gerard Annal was born in 1892 in Warboys, Huntingdonshire; the son of Henry Sinclair Annal, a chemist and his wife Caroline.  In the 1911 Census he is recorded as an assistant chemist, apprenticed to James Henry Shepherd in Clevedon, Somerset.  Shepherd’s chemist shop was, perhaps coincidentally located at Malvern House, Hill Road in that town.

Soldiers Died in the Great War record him having enlisted in the 1/4th Somerset Light Infantry in Bath, which is where the unit was based. However at the outbreak of war, the Malvern News gave his home address as Belle Vue Terrace, Great Malvern.  It can only be presumed at this stage that he was working in a chemist in the town – perhaps Manders on Belle Vue Terrace.

The 1/4th Somersets were part of the Wessex Division at the beginning of the war. The division sailed from Southampton to Bombay on the 9th November 1914 where the formation was dissolved. In January 1916 the Somersets landed at Basra as part of the 37th Indian Brigade and took part in operations in Mesopotamia.

His obituary appeared in July 1917 in the Wellington School Magazine:

“John Gerard Annal, only son of Mr. Annal, of Melksham, Wilts, entered the School in September 1906, leaving in July, 1908. He worked well and his spare time was chiefly spent reading, to which he was devoted.

“At the outbreak of war he joined the 1/4th Som. L. I., proceeding to India in 1915. In May of that year the Somersets, who had been attached to 2nd Dorsets, were ordered to Mesopotamia, and in October Jack Annal wrote from Hospital at Amarah giving a graphic description of the onward march and the hard fighting and privations of the gallant army. He was badly wounded in the left leg, and says, “I can fully appreciate the difficulties of the ambulance people, so the less said of our treatment the better. However, after 10 days of misery, we are now safely in Hospital.” Having recovered he rejoined and unfortunately was taken prisoner by the Turks, and was ultimately reported as having died in prison. Re-reading his letters which appeared in the Magazine, one realizes what a brave, adventurous soldier he was. All who remember Jack Annal sympathize deeply with his family.”

More information on John Annal can be found on the Imperial War Museum’s Lives of the Great War site, by clicking here.

If you know anything more about John Gerard Annal then please fill out the form below and we will update his record accordingly: