Next of Kin: Son of the Annie and the late Joseph Pressdee of 3 Western Cottage, Quest Hills Road, Malvern Link 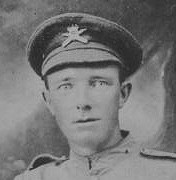 James Pressdee was born at Cradley, Herefordshire in 1889, the son of Joseph Pressdee a wine merchant’s porter and his wife Annie. He probably joined the Malvern Company of the 2nd Volunteer Battalion, The Worcestershire Regiment, which in April 1908 became C Company, 1/8th Worcesters. At the outbreak of war, he was a sergeant and a member of the Machine Gun Section.

At the beginning of April he landed at Le Havre with the rest of the Battalion, and saw action at Ploegsteert Wood, and Hebuterne on the Somme. In early 1916, the Machine Gun

Corps was formed, and the members of the MG Sections of the four infantry units of the 144th Brigade formed 144 Infantry Company, MGC. Sgt Pressdee was Mentioned in Despatches and won the Military Medal for action on the Somme, though it is not clear for which action these awards were made.

In February 1917 the Malvern News reported the award of Sgt Pressdee’s MM, and noted that he was now in a Liverpool hospital suffering from trench fever. After his recovery, he was posted to 231st Coy which joined the Egyptian Expeditionary Force in June 1917 – he visited his mother and family before he left for Palestine and told them that he didn’t think he would return home again. This was unfortunately the case, as on the 24th November he was killed by a piece of shrapnel.

His mother received the news of his death in the third week of December 1917. An officer of the Company wrote:

“I feel I must write and tell you how greatly we all miss you son and offer you our deepest sympathy. I was in command of his section at the time he was killed; in fact I was by his side. Your son was in an advances position, repelling a Turkish counter attack and doing most excellent work, when he was struck in the back by a big price of shrapnel, being killed instantly. He was buried at the battlefield by a party of the Scottish Rifles and a cross has been erected over his grave.

During the recent advance your son set a fine example to the men and behaved with the utmost gallantry. The men were greatly cut up over his death, and we all lost, in losing him, a good sergeant and a true comrade. Hoping that the fact your son died whilst fighting for his country and for the freedom of the British Empire will help to sustain you in your loss.”

This letter was printed in the Malvern Link Parish Magazine and added:

“It must be remembered that Sgt James Presdee won the MM a year ago for conspicuous gallantry in France where he had been fighting ever since the outbreak of war. Now he has won the higher honour of dying a Crusader’s death – dying whilst fighting to restore the Holy City to Christian guardianship. We trust this will be a consolation to his widowed mother, whose unfailing comfort and support he has been from his boyhood when, as a member of St Matthias Temperance Society, he was always known by the name ‘Sunny Jim’.” Sgt Pressdee whilst a member of 231 MG Coy

If you know anything more about James Presdee then please fill out the form below and we will update his record accordingly: