Next of Kin: Son of Mr and Mrs Edward B Fitton of Fairlea, Graham Road; husband of Mary Fitton of Island, Petersfield, Hants.

Previous Employment: Regular Army Officer, veteran of Campaigns in the Sudan, Egypt (1885-88) and the Boer War. 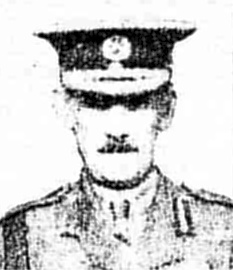 Brigadier General Fitton, the second son of the late Mr E B Fitton (Barrister and former HM Inspector of Factories) and Mrs Fitton of Fairlea, Graham Road, died from wounds received while inspecting trenches. He had been visiting the front line held by 16th Brigade near Vlamertinghe, north of Ypres on the 18th January (only 11 days after landing in France) to learn about trench warfare when he was shot by a sniper. He never regained consciousness, died two days later at 1.20pm in No. 10 Casualty Clearing Station and was buried at Lijssenthoek Military Cemetery. The news reached his brigade as they were being inspected by General Joffre and Sir Douglas Haig.

He was born on the 15th November 1863, to a musical family well-known in Malvern. They were connected with the Elgars, and his mother and sisters had many pieces of music dedicated to them (Isobel Fitton inspired one of the Engima Variations). Hugh Fitton was married in 1910 to May, the sixth daughter of the late Sir Alfred Hickman Bart, sometime MP for West Wolverhampton.

He had a distinguished military career. He was elected Kings Scholar at Eton College in 1877 and passed from Eton to Sandhurst where he was first on the list in 1883. He was gazetted Lieutenant in the Royal Berkshire Regiment 1884, promoted Captain 1893 and Brevet Major 1898. Four years later he was transferred to the Royal Warwicks and in February 1904 was again transferred, this time to the Royal West Kents and appointed Lieutenant-Colonel 1905. He subsequently rose to rank of Colonel in 1909. He was a graduate of the Staff College and a qualified interpreter in Arabic and occupied many important staff positions.

He served in several of the Sudan 1885, Egypt 1885-86 and several Nile Expeditions in the 1890s, and then in the Boer War 1899-1902. In 1905 he received the command of a Battalion of the Royal West Kent Regiment. In 1901 he was appointed Assistant Adjutant General Eastern Command and in 1913 Director of Recruiting and Organisation at the War Office. In 1914 he was given command of a brigade. To read more about his military career click here.

Of his work as a Brigadier an officer wrote: “Nothing was too much trouble to him as long as his men were thoroughly trained and he had their love and respect.” Another spoke of “his habit, which endeared him to all, of doing himself everything that the men were asked to do.”

He was a member of the Worcestershire Golf Club – the third of the club to be lost during the present war. His brother, Colonel Guy William Fitton, and Old Malvernian, served in the Army Pay Department.

A memorial service was held in Holy Trinity on the 25th January. Letters of condolence received included messages from Lord Kitchener and Earl Beauchamp. The Eton College Chronicle paid tribute to Hugh Fitton on the 3rd February 1916:

“The country has sustained a heavy loss in the death of tis distinguished soldier, With his long and exceptionally varied experience – on the staff, in regimental work, in action, in administration at the War Office…he would in all probability have risen to one of the highest commands in the field…

“No-one who ever met him could forget his gigantic figure and the piquant contrast of his gentle voice, nor could fail to carry off the impression of a reserve of quiet strength. To his great ability our leading Generals have borne witness; about his own powers he was the most modest of men. As a friend he was incomparable – chivalrous, loyal and lovable: multis ille bonis flebilis occidit.”

It is interesting that as late as three weeks before Fitton’s Brigade landed in France, it was preparing to be sent to Egypt. One wonders how much more effectively his skills learnt during the Egyptian and Sudanese campaigns could have been better put to use had the decision to switch destinations not been made.

Dongola Expedition 1896 – served as DAAG Infantry Division – during operations on the 7th June his horse was killed under him. He received the DSO and was MID and received 2 Clasps to his Egypt Medal)

Nile Expedition 1897 – Staff Officer to GOC Flying Column (present at the occupation of Barber and march to Atarba River – he was MID and awarded the Order of Medjidee 4th Class and received a further clasp to his Egypt Medal.

Nile Expedition 1898 – served as DAAG (present at Atbara and Khartoum – the night before Atbara he led four brigades across the desert in the half-light to within 200 yards of the exact position they were to take in action. The Spectator wrote in May 1898 “Capt Fitton has made a special study of what we may call desert navigation and is able to do by scientific observation what the Arabs do by instict; only he beats the Bedouin at his own business.” He was Mentioned in Dispatches and received the brevet of Major).

He commanded a Battalion of the Royal West Kents in 1905.

He was appointed ADC to Edward VII 1907

In 1913 he took up the post of Director of Recruiting and Organisation, War Office

He was promoted Brigadier General November 1914 – and before going to front as Officer Commanding 101st Infantry Brigade he commanded Coastal Defences in a part of the East Coast of England.

I am indebted to Martin Bird of the Elgar Society for contributing the following information:

The Fittons were a musical family from Great Malvern, and great friends with the composer Sir Edward Elgar, his wife Alice and their daughter Carice.

Edward Fitton (b. 1825) was a Londoner, who trained as a barrister and worked as “H M Inspector Of Fact”. His wife Harriet (1835-1924), also from London, was the daughter of Dr George Gregory, a Scottish amateur musician. She studied music in Germany and with Henry Brinley Richards who had lessons from Chopin. She was the accompanist of the Worcester Musical Union and the Hereford Philharmonic Society, and was renowned as a brilliant sight reader. She also played chamber music with Elgar, who was a first-rate violinist.

The Fittons lived in Graham Road Malvern, between The Mount, where Carice Elgar went to school, and Forli, where the Elgars lived. They had one son, Hugh, and a whole tribe of musical daughters. Hilda Fitton (b. 1871) was a violinist, Monica (b.1880) a ‘cellist. Both were members of the Malvern Archery Club.

Isabel Fitton (1868-1936) was also a violinist, who later took up the viola (good viola players, then as now, were a scarce commodity. Elgar was her first viola teacher, but she stopped her lessons with him, saying: ‘No, dear Edward, I value our friendship much too much!’ She is remembered today for being ‘Ysobel’, Variation VI in the ‘Enigma’ Variations which is built on an exercise he devised for her, for crossing strings on the viola. She never married, and lived all her life at the family home, ‘Fair Lea’, in Malvern.

Considering the closeness of the friendship of the Elgars and Fittons dating from the 1880s, it is surprising that no mention is made of Hugh Fitton until 1912, when he features in Lady Elgar’s diary for that year. By then both Hugh Fitton and the Elgars were living in London.

In July the Fittons came to Sunday tea with the Elgars at Severn House, Hampstead: “Hampstead Church at 8 – Lovely morning not so hot – Col. & Mrs. Fitton to tea”

If you know anything more about Hugh Gregory Fitton then please fill out the form below and we will update his record accordingly: