Nature of Death: Died of diphtheria as prisoner at Tournai, France 19/3/18 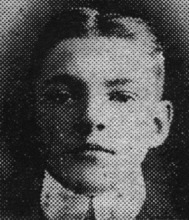 Herbert Lee was born at Malvern in 1891, the son of John and Charlotte Lee. He attended the Lyttelton Grammar School, and like many schoolboys there, also sang in the Priory Church choir under the organist Mr F. W. Wadery. He was apprenticed in the engineering department of the Great Western Railway Company at Worcester, and subsequently entered the employ of Lord Mount Stevens, Brockett Hall, Hertfordshire.

He twice volunteered to serve with the army before being passed for military service at Piccadilly and was attached to the Suffolk Regiment. He served overseas with the 7th Battalion, a Kitchener’s unit and took part in the big push at Cambrai, and after the action was taken prisoner.

Parcels were regularly sent to Pte. Lee through the Red Cross, but no acknowledgement was ever received although frequent enquiries were made. It was not until November 1918 that news reached his parents at Sidmouth Villa, Malvern that their youngest son had died of diphtheria eight months earlier.

Much sympathy was extended to Mr. and Mrs. Lee at the time; they received many letters including one from Lady Mount Stevens. If you know anything more about Herbert Lee then please fill out the form below and we will update his record accordingly: