Next of Kin: Son of Mr and Mrs H Beeden of Valley View, Wells Road and husband of Kate Beeden of 49 East Street, Hereford 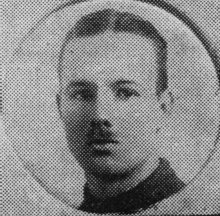 Harry Beedon was born in Singapore in 1890, the son of Mr and Mrs H Beeden (who later lived at both Valley View and Esk Bank, Wells Road). He was educated at Musselborough Grammar School and Edinburgh High School where he figured highly on the prize list, distinguishing himself at sports and being the captain of several clubs. After his parents moved to Malvern, he was a member of St Peter’s Choir.

Before enlisting in September 1914 he held an appointment in the Civil Service. In 1915 he married Kate Haines of Ledbury and they had one daughter. He had leave in August 1917, but was tragically killed by a shell on the 3rd November.

Mrs Beeden received the following letter: “Doubtless you will by now have received the sad news of the death of your dear husband and our chum. We feel that, although it must be an opening of old wounds afresh by writing, we must express out deepest sympathy with you in your greatest of losses. As was our duty we did, I think, do all that could be done for him, who is now so greatly missed from out little company of chums. Harry died instantaneously after being hit by a shell, which burst some 50 yards from him. He died absolutely without pain and he was laid to rest just by the spot where he fell. We have had a really nice cross erected over his grave.

“He is mourned, not only by our officers and men of his own Company, but by his numerous friends of all ranks throughout the Battalion, for he was a true friends to all. In the midst of all this trouble with his great responsibilities, he was always thinking of home, and many a time we have listened to his tales, about his little daughter. Of course, we will not be disturbed and will remain as a memory to the dearest of chums who has given his all to the defence of his dear ones at home.”

A memorial service was held at St Peters, Malvern Wells on the 10th December 1917.

If you know anything more about Harry Beeden then please fill out the form below and we will update his record accordingly: