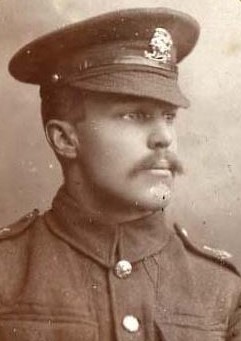 Gervase Alington (known as Winford Alington) was born in Slough, the son of Gervase O’Bryen Alington MA and Mary Charlotte Swann Alington who later came to live at Killard, New Road, West Malvern. In 1901 he was living with his uncle, James Lister a clergyman at Kilmerton, near Petersfield, Hants.

The following was written in the West Malvern Parish Magazine (by request). “Mr Winford Alington has been rejected on account of his knee and medically unfit under Lord Derby’s Scheme. At the outbreak of war and on two instances since he was told professionally that it would be useless to offer himself.”

However, with the great need for men towards the end of the war, Alington did serve with the colours, and with distinction, winning the Military Medal twice. He was tragically killed two days before the cessation of hostilities.

‘A. F. R.’ wrote in the West Malvern Parish Magazine – ‘ Very great grief has been expressed in the village of West Malvern at the news of the death of Corporal Gervase Winford Alington, who was killed in France a few hours before the signing of the armistice. Corporal Alington was educated at Radley and at Magdalen College, Oxford, and he was hoping after the conclusion of the War to take Holy Orders. He was the reader of the lessons at the morning service in West Malvern Church. When War was declared he volunteered for military service, but was rejected on account of his weak health. He was, however called up in 1917, and left England for the front in the spring of this year. He served in the ranks of a Battalion of the London Regiment, recruited chiefly from the East End, and won the respect and affection of his comrades, both by his gallantry and by the simple unassuming goodness of his deeply religious character. They have written of him since his death: ‘He was absolutely fearless in action.’ ‘He was the coolest man by far I have ever seen up the line, and I have seen some cool ones.’ ‘His conduct often calmed me down.’ ‘I saw and tried to copy his good humour.’ ‘I have never heard him say an unkind thing, nor see him do a mean action.’ ‘ Every night and morning in the line and out, Corpl. Alington got on his knees.’ He was awarded the military medal for gallantry in action in September, and a month ago he won a bar to his medal. Much sympathy is given to Mr. and Mrs. Alington, on whom bereavement has fallen in the last few hours of the war.’

Winford was buried in Tournai, which his division, the 47th, had liberated on the 8th November.  He is also commemorated by a plaque at St Benedicts Church, Candlesby in Lincolnshire where his grandfather was rector.

If you know anything more about Gervase Winford Stovin Alington then please fill out the form below and we will update his record accordingly: