Nature of Death: Killed in action at Templeux-le-Guerard, France 5/4/1917 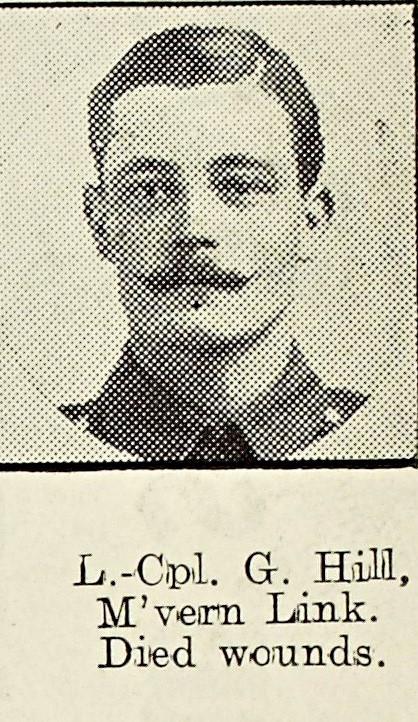 George Hill, was a pre-war member of Malvern’s C Coy, 8th Worcesters (which merged with D (Evesham) Company to form the new B Coy in 1914), enlisting at Malvern. He landed in France with the rest of the Battalion in April 1915, and was wounded in the Hebuterne trenches early in 1916. He was transferred to England, and on recovery was posted to the 2/7th Battalion, and served overseas with this unit (who landed in France for the first time in May 1916). In September of that year he found himself posted back to his old Battalion – the 1/8th – possibly due to being wounded once more, but needed as the Battalion had suffered so heavily from gas casualties in July.

He was present at fighting on the Somme around Le Sars and the Butte de Warlencourt in December and at the end of January he will have moved south to take over French trenches near Peronne. Hill was mortally wounded in a successful attack against German positions at Templeux-le-Guerard.

Mrs George Hill of Howsell Road, received the a letter from Captain H L Newman, Worcestershire Regiment: “I feel I must write to you to express my sympathy on the death of your husband in action on the 5th April. L/Cpl Hill was one of the few remaining men who mobilised with me at the beginning of the War, and I was pleased to see him return to the Company at the end of last September. Always cheery and ready to look on the best side of things, I found him a very useful NCO while I commanded ‘B’ Company. Though I have not seen him lately, I always remember him as one of the old Malvern section. Believe me when I tell you I feel his loss very much and please accept my deepest sympathy. As you probably know, he died gallantly in action which was entirely successful and that at least must be some consolation to you.” If you know anything more about George Hill then please fill out the form below and we will update his record accordingly: