Next of Kin: Son of Edmund and the late Elizabeth Haughton of Venice, Somers Park Ave, Malvern Link 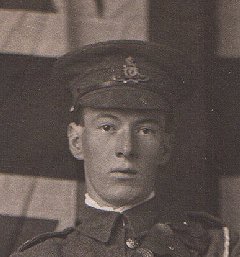 George Haughton was born in Bolton, Lancashire and joined the Territorial Artillery based at Malvern sometime before 1913. He went to France with the rest of the 2nd South Midland Brigade at the end of March 1915, he was briefly attached to the 25th Anti-Aircraft Section and was made Acting Bombardier on 17 November 1915. He was admitted to hospital on 29 December 1915. It is unclear why he was admitted, but he returned ten days later.

Having signed up for four years’ servce on initial enlistment, he was required to re-engage on 23 March 1916, but perhaps having felt he had done his bit, he initially refused. However for whatever reason, he changed his mind (or had had his mind changed) and re-engaged on 13 May 1916.

Bdr Haughton was killed during the Battle of Passchendaele when the 48th Division was attacking German positions near St Jan, a few miles outside Ypres. Read more about the actions on the Steenbeek, near Langemarck at the opening of the Passchendaele Offensive here.

On the 8th September 1917, the Malvern News reported: “Bombardier George Haughton (son of Mr Edmund Haughton of Venice, Somers Park Avenue) has been killed in action. He joined the Territorial Artillery about two years before the outbreak of war, and at the time was employed as a fitter in the Malvern District Council’s Gas Department.”

If you know anything more about George Haughton then please fill out the form below and we will update his record accordingly: