Nature of Death: Killed in action on the Ovilliers Spur below Thiepval, France 27/8/16

Next of Kin: Son of the Revd Archibald and Mrs Day of The Vicarage, Malvern Link; husband of Jane Day 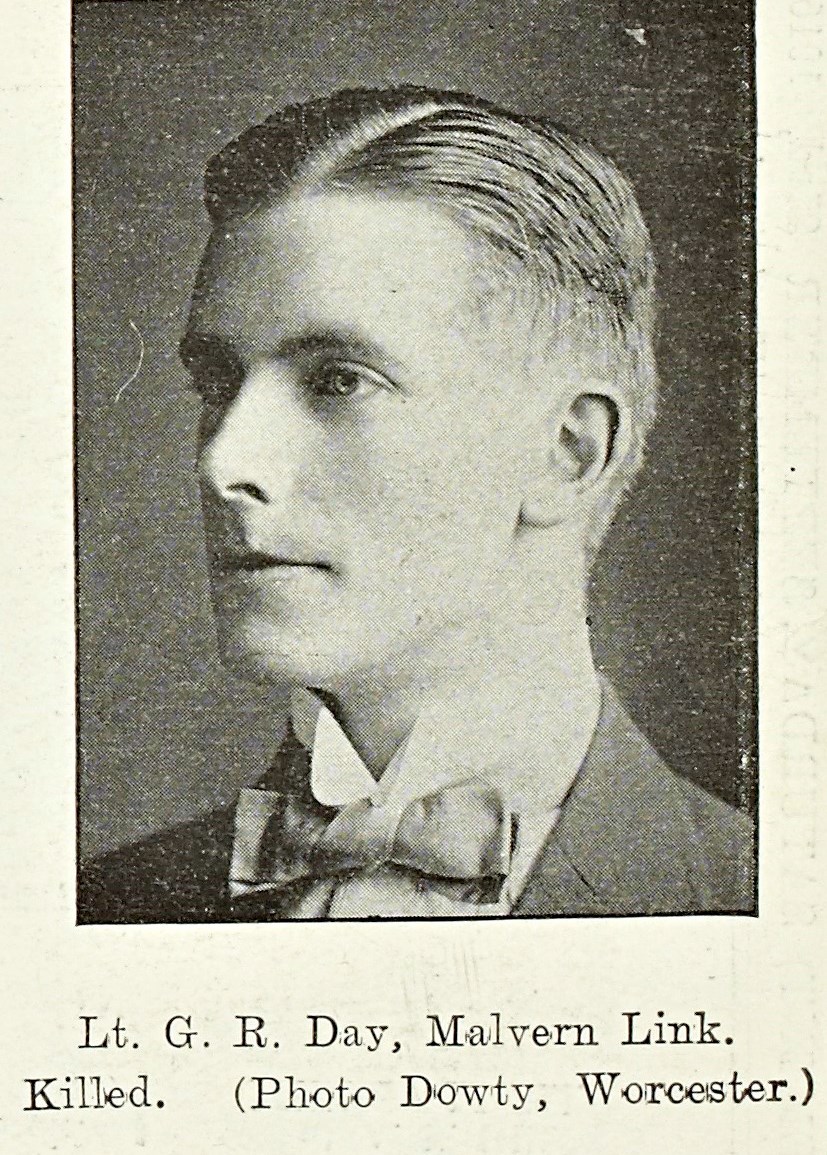 Geoffrey Day was the son of the Revd Archibald Day, Vicar of Malvern Link. From Marlborough he went to Peterhouse College, Cambridge where he did brilliantly, getting a double first in History and proxime accessit for a Varsity Prize. For a brief period between 1911 and 1912 he was a very successful master at Gresham School in Holt, Norfolk, from which he was appointed to a Fellowship and History Lectureship at Emmanuel College, Cambridge.

He enlisted at the beginning of that War and was commissioned into the 1/5th Bedfordshire Regiment; he received four wounds at Gallipoli on the 15th August 1915 at Suvla Bay. His jaw was broken in two places, but was marvellously restored by Sir Frank Farmer.

In July 1916 he was attached to the 1/8th Royal Warwicks, on the Western Front. His family received official notification of the death of his son at the beginning of September 1916. His Commanding Officer said that Lieut Day was in temporary charge of his Company and was leading then into an attack when he was wounded in one arm, but he went forward and was again struck by a bullet and killed.

He was 28, the husband of Jane Day and born in Malvern Link. His father paid tribute to him in the Malvern Link Parish Magazine: “…Lt G R Day was a good son and a brave soldier, of whom his parents and the parish in which he was reared may justly be proud and the sorrow in one in which there is happily no bitterness. You will pray for his acceptance and for his mother’s restoration to health and strength.”

Additions and alterations were made to the chancel screen at St Matthias Church, Malvern Link the following year. They were dedicated on Sunday 26th August 1917 at a memorial service to Lieut Geoffrey Reynolds Day. Appropriate hymns were sung, including “The Supreme Sacrifice” set to music by Revd Dr Harris, Rector of Colwall. In the afternoon a muffled peal was rung and on Monday, the years anniversary of his death a requiem was celebrated.

If you know anything more about Geoffrey Reynolds Day then please fill out the form below and we will update his record accordingly: