Nature of Death: Killed in action below the Butte de Warlencourt, near Contalmaison, Somme, France 14/12/1916

Next of Kin: Son of George and Fanny Page of St Hilary, Goodson Road, Malvern Link 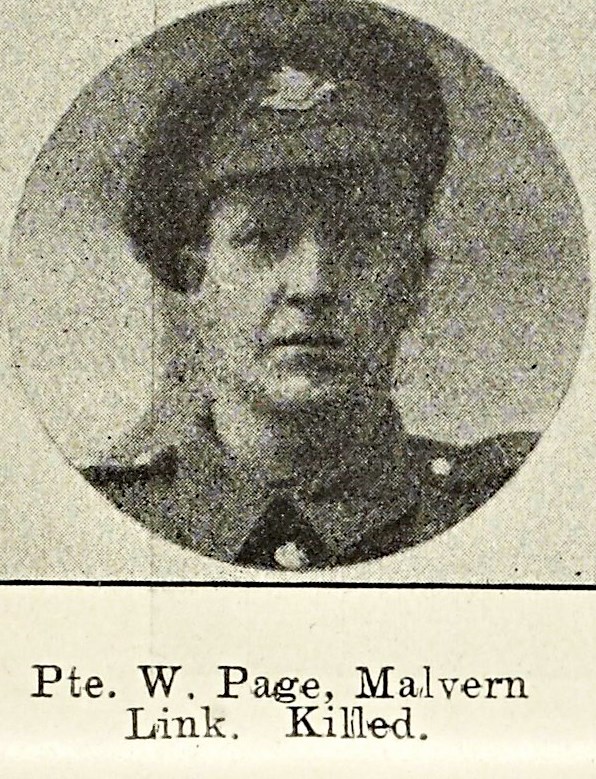 Frank William Page joined the 8th Worcesters at the beginning of the war and landed in France with the rest of the Battalion in April 1915. He was reported wounded in the Malvern News in October 1916, but it is not clear exactly when this was. This wound cannot have been serious, for he took part in a patrol with 2/Lieutenant S H Wilkes, and NCO and 6 men in front of the Le Sars Trenches near the Butte de Warlencourt. The patrol left Scotland Trench at 11.45 p.m. – the Captain of his Company (possibly Captain Burlingham) wrote to his parents saying:

“He was one of a patrol of seven men and an officer who went out to examine the ground in front of our line. The patrol was attacked by a party of the enemy and your son was shot through the head. He died instantly. It is very hard for me to offer consolation to you, but I am glad to be able to tell you that you may be justly proud of your son’s conduct. He was specially selected to go with the party, on account of his bravery and coolness made under fire, and just before he was killed he was close beside his officer giving information he had gained. You have the sympathy of all his Company officer, including myself, who have lost a valuable man, and of his comrades who are deeply touched by his loss.”

If you know anything more about Frank William Page then please fill out the form below and we will update his record accordingly: