Nature of Death: Killed in action in the Battle of Messines, Flanders 7/6/1917

Next of Kin: Son of Albert E and Mary Wilson of Grange Road, Malvern 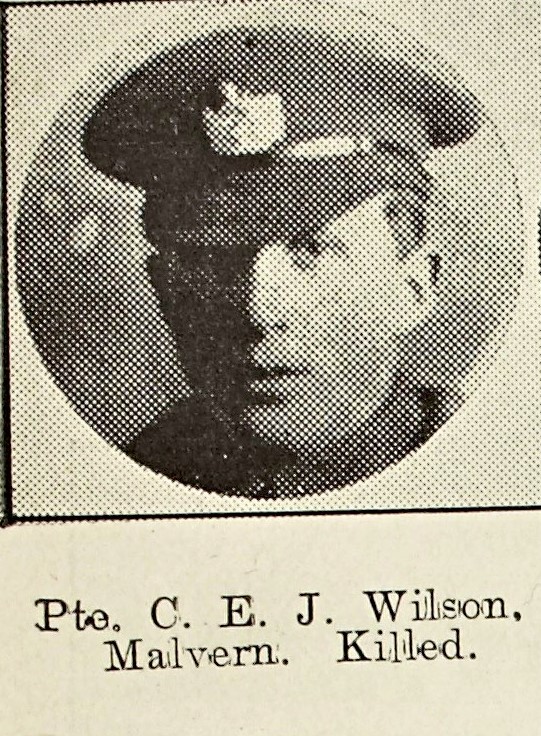 Cyril Wilson, the son of Albert and Mary Wilson was born in 1895 at Malvern. In both the 1901 and 1911 Census his father was shown as the caretaker of the Assembly Rooms on Grange Road.

The Malvern News reported that he joined a bantam battalion at Worcester in 1915; his medal award information shows that this was the 14th (West of England) Gloucestershire Regiment.  This battalion was formed in Bristol for men who would normally have failed the army’s minimum height standard – bantams as they were known.  They landed in France in January 1916.

Cyril Wilson was wounded in early Spring 1916 and returned to France on his recovery. He was posted to the 12th Gloucestershire Regiment and finally the 8th Gloucesters.

On 7th June 1917, the 8th Gloucestershire Regiment, part of the British 19th Division, attacked the Messines – Wytschaete Ridge.  The divisional attack began at 3.10am and the Gloucesters came into action at 8.10am.  They attacked and took positions in front of Onraet Wood and then a patrol pushed out in front of Oosterverne Wood and again held these positions.  A further attack was carried out in the afternoon against the village of Oosterverne and Odonto Trench.  The Battalion once again took this objective and consolidated the captured positions.  As the War Diary recorded: “The result of the day’s operations was highly successful.”

The War Diary recorded the death of two officers and wounding of two others.  However the Commonwealth War Graves Commission record that 11 other ranks were killed on that day too.  The bodies of the majority of these men were never found or identified and are commemorated on the Ypres (Menin Gate) Memorial in Ieper.

If you know anything more about Cyril Edward Jack Wilson then please fill out the form below and we will update his record accordingly: