Nature of Death: Killed in a mid air collision near Hove, Sussex 22/5/17

Next of Kin: Son of Mr William Crapp of Golf View, Malvern Common 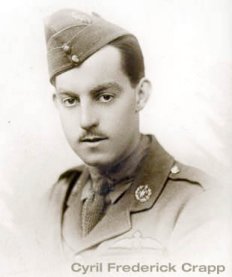 Cyril F Crapp, was the son of William Clymo Crapp, of Golf View, Malvern Common a draper at Warwick House, Great Malvern. His step-mother ran a nursing home in Manby Road, probably Brightside, which was where William was living in 1914. He served with the Machine Gun section of a battalion of the London Regiment and was invalided home. He was gazetted as a 2/Lieut attached to the RFC in August 1916. Cyril Crapp at the controls of his aeroplane

The Malvern News reported on 26/5/17: “2/Lieut W John Douglas Vinnee and 2/Lieut Crapp RFC were killed in an air collision at Hove on Tuesday (22/5/17). The two officers were flying biplanes, forming part of a squadron, proceeding in a westerly direction. At 6 p.m., at a good height, their aeroplanes came into collision. One of the machines appeared to buckle up immediately and fell to the ground at Marine Park, Aldrington and the other plane continued it’s flight for a few seconds and then an explosion occurred – the machine nose-dived towards the beach at Hove. The engine of Crapp’s machine, which fell at Aldrington was embedded in the ground. Both aeroplanes were completely wrecked and the pilots were dead when extricated. A crowd of several thousand quickly congregated near the place where the machines fell. “

Lieut Crapp’s funeral took place at Aldrington. A large crowd turned up to watch, and his coffin was borne by Sergeants of the Royal Flying Corps. In the funeral procession were detachments of his Squadron and the Royal Naval Air Service Naval Patrol, Newhaven. Mourners included his mother and father, Mr and Mrs Crapp, Mr W Crapp (his brother) and his CO Major J C Halahan 78th (Home Defence) Sqn RFC.

Mr Crapp’s elder son, who went through the trench warfare of 1915 and the engagements of Neuve Chapelle and Aubers Ridge, was severely wounded and eventually discharged.

If you know anything more about Cyril Frederick Crapp then please fill out the form below and we will update his record accordingly: