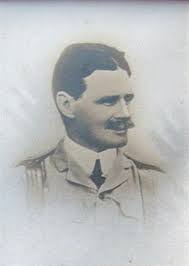 Cyril Jackson was born in Northwood, Staffordshire, the fourth son of the Revd Charles Bird Jackson and Mary Jackson (nee Compton). He attended boarding school in Lincolnshire and later at Newark. On 5 November 1888 he received a commission in the Border Regiment.

He served in Malta with the 2nd Border Regiment in 1889 and from there proceeded to India in February 1890 on HMS Malabar and was stationed at Chakrata. However he was soon returned to England on sick leave after contracting fever. He went out to India again in March 1891. In 1892 he was attached to the 27th. Madras Native Infantry, Indian Army in Mahidpoor, Lucknow and transferred to the Indian Army in April 1893, being posted to the Bhopal Battalion, in Sahore, Bhopal. He married Beatrix Clara Grey at St Thomas’ Church, Calcutta on 9 March 1899.

Jackson saw service in Afghanistan and Kashmir before being stationed in Allahabad for several years as Adjutant to the local levies. In 1914 was given the command of the 103 Maharattas Light Infantry and formed part of “D Force” in the Mesopotamian Campaign.

“I shall always remember this march as I rode with Colonel Jackson of the 110th Maharata’s, and one of the best, who with his wife used to drive out from ‘Nagar to my dam on Sundays. The Colonel was one of the few who took an interest in the country and its prospects, and being a first class artist himself, spent all his spare time sketching. As we rode along he spoke eagerly of the Arch and other ancient monuments we hoped shortly to see and how pleasant a rambling tour around Baghdad would be, little realising that within three days he would be lying dead on the field of Ctesiphon.”

“Cyril was transferred to the 110th. in command at the start of the month. In the battle for Ctesiphon the 110th were part of Force B, and suffered terrible casualties from the Turkish machine guns, sustaining casualties of 560 out of a strength of 700. The 110th lost all its officers bar one. Ironically, if he had remained with the 103rd, he would like as not have survived as they were held in reserve all day and sustained very few casualties.”

He was killed by enemy action near Baghdad. According to report a shell landed on a tent during an orders meeting and killed several senior officers, although later research seems to indicate that he died under the Turkish machine guns.

If you know anything more about Cyril Compton Jackson then please fill out the form below and we will update his record accordingly: