Nature of Death: Killed in action at the Battle of Flers-Courcelette, France 15/9/1916 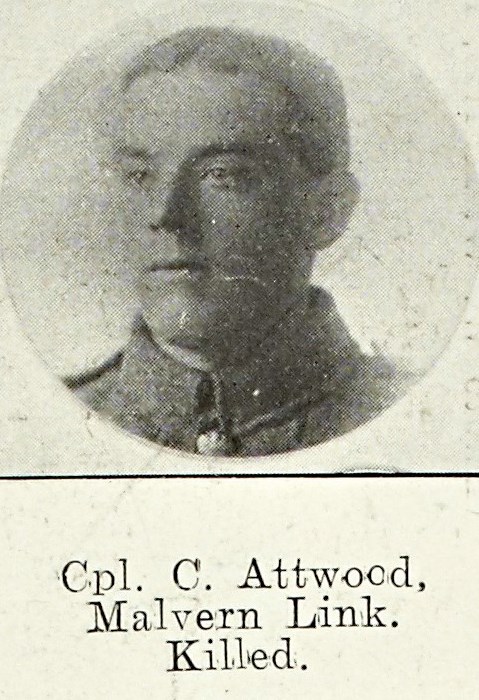 Christopher Attwood was born at Broadheath near Worcester in 1891, the son of Charles Attwood, a farm labourer and his wife Louisa.  He was one of eight brothers and sisters.  The family moved around quite a bit, Christopher’s older brothers and sisters were born in Malvern, he and a younger sister were born at Broadheath and his youngest sister Mary was born at Bishop’s Frome, Herefordshire.  The 1901 Census found them working at Yarkhill Court, Herefordshire, ten years later they were at Kynaston, Much Marcle, Herefordshire.

Christopher enlisted in the Kings Shropshire Light Infantry (KSLI) at Hereford in late August 1912. By this time his parents lived in Ross-on-Wye, Herefordshire, but his sister, Ada, now married, lived in Upper Howsell, Malvern.

He landed in France with the 1st KSLI on 10th September 1914 and was wounded at Ypres in June 1915.  On recovery he was , but was posted to the ‘D’ Company, 5th KSLI.  This unit was heavily involved during the Battle of the Somme.  In October 1916, the Malvern News reported:

“Cpl Christopher Attwood, King’s Shropshire Light Infantry (the brother of Mrs A L Lockyer of Upper Howsell Post Office) was killed on the 15th September 1916. A member of the Old Army he went to France at the outbreak of war and was wounded at Ypres in June 1915.

“Mrs Lockyer received a letter from one of her brother’s friends Sgt H Beeston – he wrote: ‘It is with great regret that I have to announce to you that your dear brother has been killed in action. It may be a consolation to know that his death was instantaneous. He was killed by a bullet whilst gallantly leading his platoon in a charge. Your loss is very much our loss, as I am very proud to say that Chriss [sic] was a very big chum of mine and as I come from Worcester and know Malvern very well, many’s the time that your brother and I have passed more than one solitary hour away talking of old haunts.

‘It is needless to say how personally I feel his death as I had always found him a very staunch comrade, at all times one of the bravest soldiers. I apologise for having to open your letter to get your address: I hope you forgive me. I have distributed the cigarettes among his pals – they were many. I have written to his parents at Hereford, telling them the sad news, hoping they will take it well, also yourself.’”

Around the same time that Cpl C Attwood was killed in action, Mrs Lockyer’s other brother, Pte Arthur Attwood, who before the war lived with her in Wilmot Road, was gassed for the second time. He had previously been gassed with the rest of the 1/8th Worcestershire Regiment and after a period of convalescence in Rouen he went on to serve with the 1st Battalion of the Worcestershire Regiment.

If you know anything more about Christopher Attwood then please fill out the form below and we will update his record accordingly: