Nature of Death: Killed in action France and Flanders 2/4/15 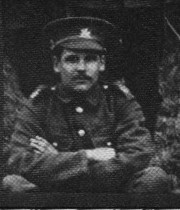 Charles Bishop was born Ledbury in 1889, the son of William and Annie Bishop. The 1901 Census shows the Bishop family living at Ledbury Road, Eastnor and the William Bishop as a non-domestic coachman. Charles had two brothers, William and Albert and two sisters Emily and Annie. At the outbreak of war Charles Bishop enlisted in the Monmouthshire Regiment at Abergavenny. The following appeared in the Malvern News the following year:

“Pte C H Bishop, 3/Monmouths has been killed in action. He was the son of Mr and Mrs W Bishop of 15 Westminster Road, Malvern Wells. He enlisted in August 1914, having been previously employed for four years in the pits of Tredegar. Bishop was wounded some time ago, but he returned to the trenches were he met his death by a shell. A letter from Capt Gattie of the 3rd Monmouths wrote:

I regret that I have not had the opportunity of writing to you sooner to express my deep sympathy with you in the loss of your son. He had proved himself a keen, hard-working and capable soldier; and I had more than once occasion to congratulate him particularly on his work.

I was quite close when the shell burst which fatally wounded him and as he became unconscious almost at once, he did not, I am sure, suffer much pain. He has been laid to rest in a very beautiful pinewood, close to the spot where he fell.

“Bishop’s parents have also received condolence messages from the Newport Chamber of Commerce and the President and Members of the Monmouthshire Territorial Association.”

Unfortunately, with the passing of time Charles Bishop’s grave was either lost or destroyed and his name is numbered amongst those of the Ypres Salient who have no known grave on the Menin Gate.

If you know anything more about Charles Henry Bishop then please fill out the form below and we will update his record accordingly: