Next of Kin: Son of Joseph and Mrs A Johnson of Appleton, Chester Place, Queens Road, Malvern Link 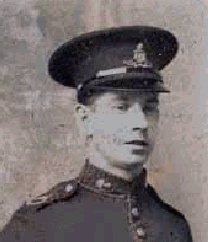 In May 1917, the Malvern News reported: “Sgt Bertram Johnson, RFA, the third son of Mr and Mrs Joseph Johnson, Chester Place has died of gun shot wounds on the 6th May. He was 28 and unmarried. Before the war he was employed at Messrs W and F Webb, Worcester.”

His father Joseph Johnson, who had been a member of the volunteer artillery and later territorial artillery, served as an instructor during the war and died in July 1917.

If you know anything more about Bertram Joseph Johnson then please fill out the form below and we will update his record accordingly: