Next of Kin: Husband of Mrs Caroline Kyte of Montrose Cottage, Poolbrook 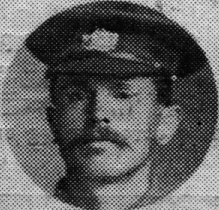 In April 1918, the Malvern News reported: “Pte Arthur Edwin Kyte of the Gloucestershire Regiment (whose home is Montrose Cottage, Poolbrook) died in France on the 28th March from wounds in the left leg. He has served for three years (two at the front). He leaves a widow and four children.”

The 13th Gloucestershire Regiment (Forest of Dean Pioneers) were formed by Lt-Colonel Webb at Malvern, mostly from miners and other men suitable for pioneer work from the Forest of Dean. Arthur Kyte joined the battalion sometime in January 1915. The Pioneers camped for sometime on Peachfield Common – only a few minutes walk away from Kyte’s home. Colonel Webb also raised the only Pioneer Battalion of the Worcestershire Regiment – the 14th (Severn Valley Pioneers) – which went on to serve as pioneers to the 62nd (Royal Naval) Division. To read more about the 13th (Forest of Dean Pioneers) Gloucesters click here.

The official publication Soliders Died in the Great War record Pte Kyte’s death as “Killed in action France & Flanders 24/3/18”. This may indicate the day he was reported missing from his unit, and possibly indicate the day on which he was wounded.

If you know anything more about Arthur Edwin Kyte then please fill out the form below and we will update his record accordingly: