Nature of Death: Died of wounds received near Hebuterne, Somme at Couin 1/9/16 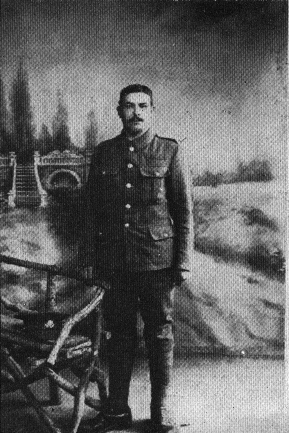 Archibald Garbutt, was born at Cradley in 1886, the son of Charles, a bricklayer’s foreman, and Livinia Garbutt (who later lived at 10, Laundry Cottages, Yates Hay Road, Upper Howsell). He was the eldest of the family, having four younger sisters.

Dvr Garbutt joined the South Midland Territorial Artillery on active service on 26 November 1915. Until May 1916 he served with the 2nd Brigade Ammunition Column (BAC) which was responsible for keeping the Artillery Brigade supplied with ammunition and had been based at Malvern before the War. On 15 May 1916 the three BACs of the Division were merged to form a Divisional Ammunition Column (DAC).

The Malvern News reported: “He died of wounds received whilst taking up ammunition to the Batteries. The Sister-in-Charge of the Camp Operating Station says: ‘Everything possible was done for him, but I regret to say he died soon after admission. He didn’t suffer much pain; he seemed to sleep away, so I did not disturb him to get any message. I am sure he did not realise he was dying. I hope it will comfort you to know that he was well cared for soon after being wounded.'”

Capt MCH Smith Carrington writes: ‘The officer in charge tells me your son was most plucky. Since he has been in my unit he has proved himself and a most conscientious and good soldier, you have every reason to be proud of him.'”

If you know anything more about Archibald Garbutt then please fill out the form below and we will update his record accordingly: