Next of Kin: Son of Robert G. and Emily E. Knowles, of 33, Madresfield Road, Malvern, Worcs 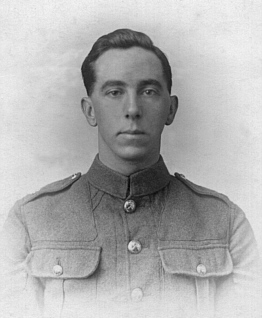 His story featured in the Malvern Gazette and Ledbury Reporter on Friday, 25 April, 1997 – following a Dyson Perrins C.E High School history trip to the First World War battlefields. The party included Cpl Knowles’ great grand-daughter, Rosie Davies, who was the first member of the family to visit the grave, although the family were sent a photograph of it soon after the end of the war.

As the paper reported, it was an emotional moment, not just for Rosie, who fifteenth birthday it was on the day of the vist, but also for the pupils and teachers.

Corporal Allan James Knowles, of the 36th battalion Machine Gun Corps, died in action during the last Hundred Days of the warat the age of 22. A surviving letter from a Lincolnshire training camp to his sisters Nan and Dot, promises post cards for their album andis signed, “Your loving brother Jim.”

He is buried at Dadizeele, the village which was reached by the 36th (Ulster) Division (to which Knowles belonged), and taken by the 9th (Scottish) Division, on the 29th September 1918, after remaining in German hands during almost the whole of the War. Dadizele New British Cemetery is in fact an extension of the Communal Cemetery. It was made after the Armistice by concentrations from other burial grounds and from the battlefields of 1918 (there are a few 1914 graves in plot VI, row D). The graves are mainly those of the 36th, 9th and 35th Divisions. There are now over 1,000, 1914-18 war casualties commemorated in this site. Of these, over 150 are unidentified and special memorials are erected to seven soldiers from the United Kingdom, known or believed to be buried in the cemetery. Other special memorials bear the names of three soldiers from the United Kingdom, buried in German cemeteries, whose graves could not be found.

If you know anything more about Allan James Knowles then please fill out the form below and we will update his record accordingly: