Next of Kin: Son of Charles Edward and Fanny Alice Lambert, of Ivy Villa, Newtown Road

Previous Employment: Church Organist at Church of the Ascension 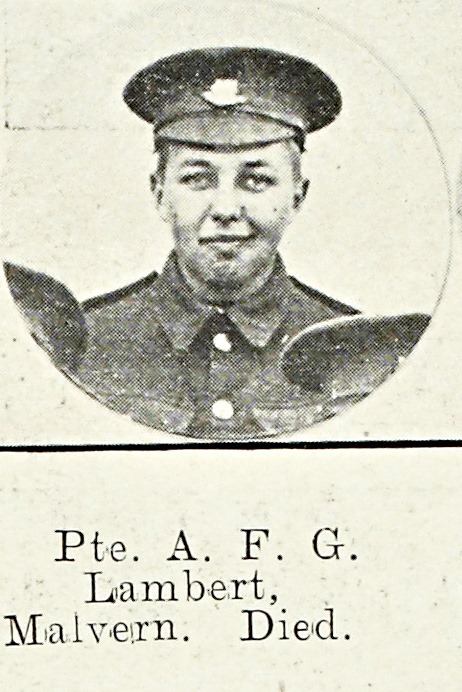 Albert Francis Gerald Lambert was born in Droitwich, the son of Charles Edward and Fanny Alice Lambert, (later of Ivy Villa, Newtown Road). He was 22 years old when he joined the Colours in February 1916 and left England in June – less that two months later he died of enteric fever.

“It is with deep regret that we record the passing of Gerald Lambert, aged 22, who died of illness whilst at sea bound for India. Gerald and his two brothers were formerly Priory choristers and scholars of the Lyttelton Grammar School. His elder brother died after a long illness in 1900. For sometime Gerald, who had been a pupil under Dr Wadely and Dr Hammond, was organist at the Church of the Ascension. He often officiated for Dr Hammond at the Priory on Friday at 12 o’clock War Intercession Service.”

Although the this report states that Gerald Lambert was bound for India, as the 9th Worcesters were serving in Mesopotamia at the time (modern day Iraq) and as he is buried in Basra War Cemetery, it is likely he was due to serve here and not in India. It seems he had the misfortune to contract enteric fever on the military transport, before even landing in the Mesopotamian theatre of operations. Interior of the Church of the Ascension, the organ loft is directly above from where this picture is taken.

If you know anything more about Alfred Francis Gerald Lambert then please fill out the form below and we will update his record accordingly: