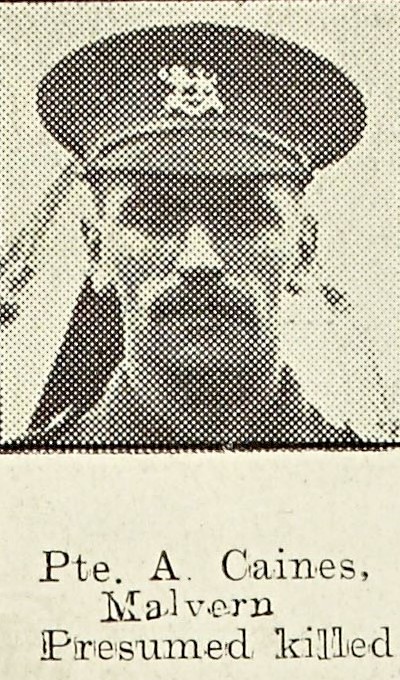 Albert Caines was born in Upper Wyche in 1889.  He enlisted in the Herefordshire Regiment at Hereford and served with the unit in Palestine.  On 31st August 1918 the Berrow’s Worcester Journal reported that:

“Pte Albert Caines (husband of Mrs Caines of Fair View Cottage, Upper Wyche, Malvern) is presumed to have been killed or to have died of wounds on March 27th 1917.  He was educated at the Wesleyan School, Lansdowne Crescent.  Before the war, he was employed by Mr Berkeley, at the Royal Well Mineral Water Company.  He joined the Herefords in July 1915 and went to Egypt in March 1916.  Twelve months ago Mrs Caines had news that he was missing after the engagement on March 27th 1917.  A month ago she received news that he was presumed killed on that date.  Another message from the Red Cross stated that a search had been made in all hospitals in England and abroad without avail, and that her husband was not a prisoner.  He was the son of Mrs W Caines of 7 Gordon Terrace, Upper Wyche, Malvern, and has two brothers in the Army.”

If you know anything more about Albert George Caines then please fill out the form below and we will update his record accordingly: